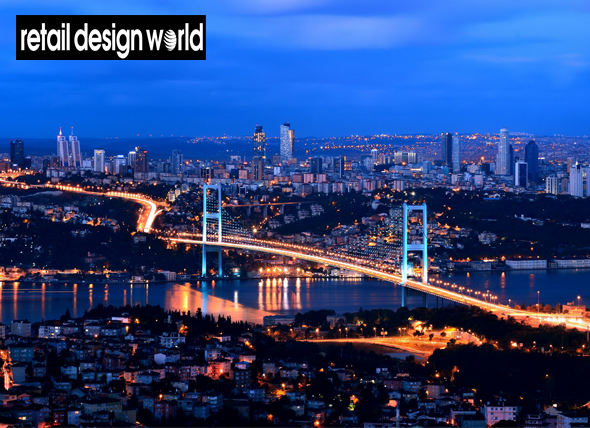 The Turkish economy – despite the recent political unrest – continues to grow, and shoppers keep on shopping. The retail sector has maintained its momentum due to increasing per-capita disposable income and an ever-expanding consumer appetite.

As in the rest of the world, rapidly changing technology affects the lifestyle and shopping habits of the Turkish consumer. Despite this, an emotional connection between brand and consumer has not lost its value.

While the debate continues about the diminishing importance of physical environments resulting from the boom in e-commerce, most Turkish consumers still value face-to-face contact and human interaction during their shopping experience. This cannot be achieved without a physical environment: a bricks-and-mortar store. As a result, retail shopping still thrives – and the importance of a high quality branded retail ‘experience’ is greater than ever.

To gain a better understanding of shopping and retail trends in Turkey, it is important to understand the cultural landscape of the country. As a physical bridge between Europe and Asia, Turkey’s cultural diversity is clearly manifested in its consumer attitudes and retail trends. In the larger towns like İstanbul, Ankara, İzmir and the cosmopolitan coastal cities, the culture is more secular and ‘European’, while in the rest of the country cultural traits are more conservative and influenced by religion.

Consumers in the larger cities revel in the fact that a more competitive market offers them more choice, which includes a variety of national and international brands at every level. As a result, the role of a compelling and memorable retail experience – throughout the customer journey – is ever more critical. Better late than never! Compared to 20 years ago, it is now the consumers who manage the brands rather than brands managing the consumer.

Organised retailing is developing at a fast pace due to nation-wide investment in shopping malls (of which there are more than 300), and the aggressive expansion strategies pursued by retail groups. This climate, coupled with the increased availability of credit cards, has resulted in a transformation in consumers’ retail habits. People now expect to see all products available in one location. These shopping malls are also part of the recent shift in urban lifestyles. And, while the population is equally divided between men and women, shopping in physical retail environments is more commonly an activity for women.

On the other hand, with the rapid adoption of e-retailing solutions, more and more consumers now look for online shopping options. There are currently around 40m Internet users in Turkey (53% of the population), which places Turkey 5th in the European rankings (by volume) after Germany, Russia, the UK and France.

Half the population is under 30 and actively uses social networks. In light of this, online retail in Turkey is expected to see an annual growth of 15.8% in constant value terms by 2017, 107% in total, reaching a market value of US$6.6bn according to Euromonitor International. The same research also forecasts Internet adoption to rise 27.5% between 2012 and 2017, driving e-commerce. Similarly, market penetration of smartphones is expected to increase by 124% between 2012 and 2017.

It’s clear that retail trends and consumer attitudes in Turkey cannot be pigeon-holed by one or two hard facts. Cultural diversity, population growth, contrasting political views, huge disparity in wealth, and ever-developing market conditions result in a fluid environment. Shopping and retail trends evolve by the day. This represents an opportunity for both consumer and retailer.

Zeynep Durukan is Head of Marketing at I-AM Istanbul